Of the six San Diego life science initial public offerings (IPOs) in 2018, Crinetics Pharmaceuticals (CRNX) raised the most money at $117 million1. Started by four scientists in 2008 and now developing novel therapeutics for rare endocrine diseases, co-founder Scott Struthers was invited by Devang Thakkar and TiE South Coast to present how Crinetics went from garage to NASDAQ. Scott also co-founded San Diego Entrepreneurs Exchange (SDEE) so were happy to join him at JLABS San Diego for an update on his story.

Starting a Company During the Economic Recession

Crinetics was co-founded by Scott Struthers, PhD, Frank Zhu, PhD, Ana Kusnetzow, PhD, and Stephen F. Betz, PhD, in 2008. They had all worked at Neurocrine Biosciences, where they worked on a small molecule drug that acted on a GPCR peptide hormone receptor for the treatment of endometriosis. This incited ideas for doing drug discovery better. Although the economy was in the depths of the recession, starting a company had some advantages for Crinetics. Many companies were going out of business and selling their belongings. Colleagues in these labs told Crinetics they could have anything they didn’t sell. Not one to pass up a good deal, Scott drove his pickup around town and collected an assortment of lab supplies including chemistry glassware. Today Crinetics has seven chemists and they’ve never bought any glassware. “That was a big help back in the day because we had no money, we did not take a salary. We just filled our garages with this stuff until we got enough money to open a lab,” Scott said. 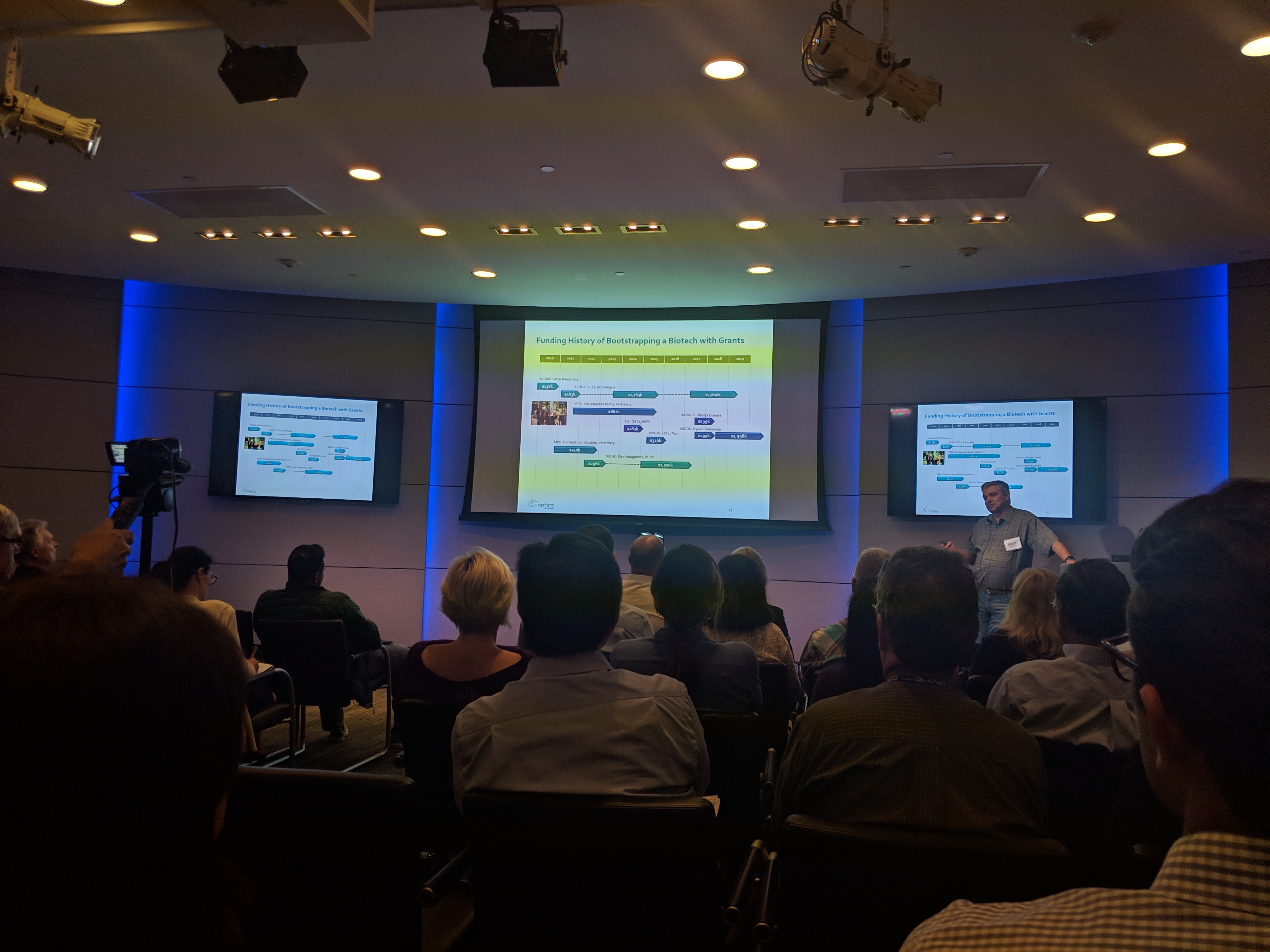 Private Funding for the First Lab

The first lab was modest and small. Steve would bring in his new puppy, Penny, instead of leaving her at home alone. “Because what is HR going to do?” Scott joked. “I would bring in my dog occasionally and it just became a thing, so you will still see puppies around the offices today.” Crinetics started working on areas where they could get funding. They had an approach for ovarian cancer that could selectively kill ovarian cells. This attracted the attention of a Santa Monica billionaire who wanted to reduce unnecessary euthanasia by spaying and neutering cats and dogs non-surgically. He gave them funding to apply their approach to an injectable method. “One lesson in entrepreneurship for me was to be willing to explore good ideas even if they are a bit outside of your comfort zone,” said Scott. It never panned out, but Scott says he’d like to resume the project when they have more time.

The NIH has three grant submission deadlines each year and Crinetics would submit two or three every cycle. “We were writing grants all the time to get our ideas funded. We had a 30% hit rate on ideas, and it helped us grow,” Scott said. When they got more money, they moved to their second lab. “There were still only four of us, but in a company at this stage you do everything yourself. We didn’t hire movers or even janitors. We moved ourselves, fixed broken fume hoods, and cleaned the restrooms,” Scott recalled.

Acromegaly and the Genesis of Crinetics

Things started to come together when they began working on a disease called Acromegaly. Acromegaly is excessive growth—enlarged hands, feet, and facial features—caused by a benign tumor in the pituitary gland producing too much growth hormone. Richard Kiel, a famous actor in Jaws and Bond movies, had acromegaly. It causes metabolic changes, hypertension, cardiovascular disease, and diabetes and if left untreated can have a severe effect on mortality, morbidity, and quality of life. Neurosurgery to remove the tumor is tricky and often leaves residual tumor that continues to cause too much growth hormone.

Based on their Neurocrine experience with GPCRS and Scott’s graduate studies at The Salk Institute under Wiley Vale, they knew it was possible to inhibit growth hormone secretion by making analogs of a peptide hormone called somatostatin. They wrote another grant and were awarded a $2 million Phase II SBIR. “We celebrated by taking the whole company and spouses out to a fancy dinner. We have always tried to celebrate our successes,” Scott beamed. This funding allowed them to lease more lab space and add more people. “For the first time, we hired movers, got new furniture, albeit from Ikea, that we put together ourselves. By 2014 we had a respectable-sized team—and added more puppies,” Scott said.

By 2015, Crinetics had identified some promising small molecules and the beginnings of a drug pipeline. Scott explained how they used iterative medicinal chemistry for small molecule drug discovery—make a molecule and test it to inform of improvements for the next one. Using this approach, they homed in on the 808th molecule as the drug candidate for acromegaly, as 807 were not good enough, but kept going making nearly 5,000 molecules as backups. “This is actually super-efficient, as other companies have made nearly 10,000 in other projects before identifying the first drug,” Scott said. While they had raised $12 million in non-diluted funding from their own sweat equity and grants over the first 10 years, they did not have enough money to move CRN808 forward to clinical trials.

Series A Funding for Clinical Trials

They took a big risk and stopped seeking grant funding and spent a year focused on raising venture capital. The investors valued Crinetics at $12 million and were willing to put in $30 million with an option to draw $10 million later. Crinetics thought that valuation was too low and met to decide if they should walk away. “We decided that the $30 million would allow us create to more value and de-risk fundraising in the future,” Scott said. They didn’t know what the financing environment would be like in the next 6-12 months and decided not to wait. “It was one of the best decisions we ever made,” Scott said. They closed a $40 million Series A, of which they only used $30 million before moving on to their next round.

The Series A investors were willing to make this large investment because Crinetics was developing their somatostatin analogs as small molecule drugs taken orally once a day—a welcomed alternative to monthly injections. Acromegaly is treated with a 2-ml “goo” injected intramuscularly, once a month, with an 18-gauge needle. “This is not a simple insulin injection,” Scott said. While it is painful, Scott says patients complain more about taking time off work for monthly doctor’s office visits. Their once-a-day oral approach enabled consistent exposure and rapid dosing adjustments. Furthermore, the market for the injectable-based treatments for acromegaly and neuroendocrine tumors was about $3 billion. Their approach to treating acromegaly and the possibility of developing related treatments in the future justified the investment early on. “We celebrated with a dinner out, hired more folks, and bought new equipment,” Scott said.

With money in the bank, Crinetics began Phase 1 testing on healthy volunteers. When given CRN808 orally, it blocked 90% of growth hormone, establishing clinical proof of concept and the suitability of a once-a-day oral approach, with a starting dose of 10 mg per day for future trials. The drug worked in cell cultures, rats, and now in healthy volunteers, doing what it was supposed to do. The results from healthy volunteers were consistent with approved injectables drugs, which were being used in patients. “This is probably the most important piece of data that we generated,” Scott said. “This was enough to convince the investment community that we might have a real drug on our hands.”

Series B to Fund Clinical Trials and New Programs

Crinetics started exploring other projects because the peptide hormone somatostatin acts on five different receptors. They wanted to optimize a molecule to inhibit insulin secretion for treating hyperinsulinism. When they showed in a hypoglycemic rat model that increasing doses of their drug candidate 02481 could restore normal glucose, they knew they had a potential drug candidate and a second program. “We went to raise additional money to support the CRN00808 clinical trials and develop new programs, closing a $63.5 million Series B in March 2018,” Scott said. With the momentum of positive trials results, new programs, and the ability to attract funding, they flipped instantly into working on the IPO.

As the company was busy moving again and generating data, Scott focused his efforts on preparing for the IPO process. He says first you bring in an auditing firm to make sure your financial house is in order. Then you select your banks and sit in a room with 25-30 people—bank lawyers and staff and your senior management team—to produce an S-1 document. You go out on the road for “test the waters” meetings to see who’s interested. When the S-1 becomes public, you go on the actual road show to see if they’ll order. “We ended up with well over $1 billion worth of orders for our $100 million financing, allowing us to pick and choose the investors,” Scott said. “We wanted quality investors who believed our story and would stick with us long term.”

The Crinetics IPO did very well, opening at $17 a share in July 2018, climbing to $42 in September, and settling back to the low 20's for a market cap of around $500-600 million. “Far from the original pre-money evaluation the Series A investors gave us of $12 million,” Scott said. “I was absolutely right that we were undervalued early on, but it was the right thing for us to take the money and build the company.” Scott added that Crinetics owns all the patents—no licensing in or out—with the first patents expiring in 2037. “This is what builds those valuations because you are looking at billions of dollars of potential drug sales discounted by the time to cash flow and the amount of risk,” Scott said. “Our goal is to commercialize these drugs ourselves and reinvest in the next generation of drugs.”

With the move to the new building complete, Crinetics has started new projects, such as a treatment for Cushing’s disease, continuing the theme of small molecule drugs acting on peptide hormone receptors. With CRN808 now in global Phase II trials, they have four molecules and four projects in various stages of discovery and development. At 54 employees Crinetics is actively recruiting in several areas such as patient advocacy and medical affairs. Scott closed with a recruitment pitch, “It’s a fun place to work, and you don’t have to have a dog.”