On October 13, 2022, the San Diego Entrepreneur Exchange (SDEE) had its annual Founders Tales. The event was back in person at Joya Kitchen, which provided beer and wine along with tasty sliders, flatbread pizza, and delicious desserts.

This year Founders Tales was moderated by Jiwu Wang, the CEO of Allele Biotech and the speakers were Joanna Davis, President and CEO of the San Diego Biomedical Research Institute, Devon Cayer, co-founder and CEO of 1859 Inc., and Phil Chamberlain, co-Founder, president and CEO of Neomorph. 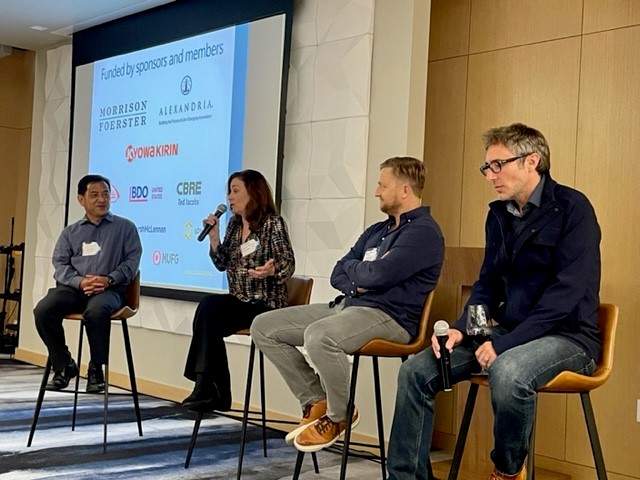 Joanna founded the non-profit San Diego Biomed in 2014 to understand how different diseases are connected. The impetus came from the possibility of losing a grant that she had worked so hard to get. Although she had never started a company or institute before, she felt that she needed to take the plunge otherwise she would have regretted it.

A certain disease may lead to another, like diabetes can lead to kidney disease. However, kidney disease can have many etiologies, not only diabetes. In addition, pathways that protect from cancer may increase the risk of type 1 diabetes, while the immune system, which is at the center of autoimmunity, can also prevent cancer. If a drug treats one disease, it may not treat that disease in all people if their disease is caused by different mechanisms. By understanding how diseases are connected and the pathways that drive them, we may be able to block those pathways and stratify patients into groups based on the cause of their disease. Ultimately, this will lead to more efficacious and safer therapies.

Over the years, revenues have increased and now San Diego Biomed ranks seventh in San Diego for NIH funding. The NIH, foundations, and private donors contribute to the research of 11 principal investigators and 34 employees. San Diego Biomed is made of five centers that focus on autoimmunity, cancer diagnosis and therapy, aging and wellness, neurodegenerative diseases, and vaccine design. These centers come together in meetings where everybody can contribute to everyone’s else research in a collaborative fashion. San Diego Biomed also collaborates with UCSD, the Scripps Research Institute and the Sanford Burnham Prebys Institute for the use of their core facilities.

Devon earned a PhD in chemistry from the Scripps Research Institute and was bound for a post-doctoral fellowship at Oxford when he had an idea to understand biology at a single cell level. An entrepreneur at heart, he decided to start his own company. Later he went back to Scripps and a presentation at GSK led him to start 1859 Inc. in June 2019. The origin of the company’s name is somewhat shrouded in mystery, but it has something to do with evolution and the year that Darwin published On the Origin of Species. Devon made pitches to VC companies and was funded by a local VC. Commitment to a technology is important, however, VC do not care too much about the technology; they are more interested in the end product and how much money it can earn them or save them. At this point, 1859 has numerous partnerships with pharma companies to accelerate their drug discovery efforts.

Phil earned a PhD in structural biology at Oxford and worked in industry, including Celgene, for a long time. He published numerous papers while there and this publication record probably helped the acquisition of Celgene by BMS. Phil decided to quit his job in February 2020 to start Neomorph, a platform-based company. Fortunately, he was able to secure a building for his new venture before COVID hit, and construction could progress during the pandemic. He had to get used to working from home and to not having a team of people to manage. Eventually, he hired a supportive VP of operations and the company took off.