About a year ago, John Hood, Ph.D., sold his company, Impact Biomedicines, which had only raised $20 million, to Celgene in a deal worth up to $7 billion. As the keynote for this year’s SDEE “Get To Know Your Neighbors” event on March 21 at the Alexandria at Torrey Pines, we were eager to hear his story. Hood walked us through his fedratinib journey, which began 17 years ago, and pointed out lessons he learned along the way.

In 2002, when Hood was finishing his post doc at Scripps Research, he became part of the spin off, TargeGen, funded by San Diego venture capital firms Enterprise Partners and Forward Ventures. Originally a struggling targeted gene delivery company, TargeGen pivoted into small molecules. They developed a small molecule inhibitor—now known as fedratinib— of Janus kinase 2 (JAK2) after a paper showed that mutations in JAK2 were driving a host of diseases, including myelofibrosis.

Myelofibrosis is a condition where bone marrow is replaced by fibrous scar tissue. JAK2 normally helps control the production of blood forming cells in the bone marrow. Mutated JAK2 leads to overproduction of red blood cells, white blood cells, and platelets, progressing through essential thrombocythemia (too many platelets) and polycythemia vera (too many red blood cells). In getting cleared through filter organs, the spleen and liver become enlarged, resulting in portal hypertension and cardiovascular events. There are about 20,000 myelofibrosis patients in the US, and medium to high risk patients have about 2.5 years to live. 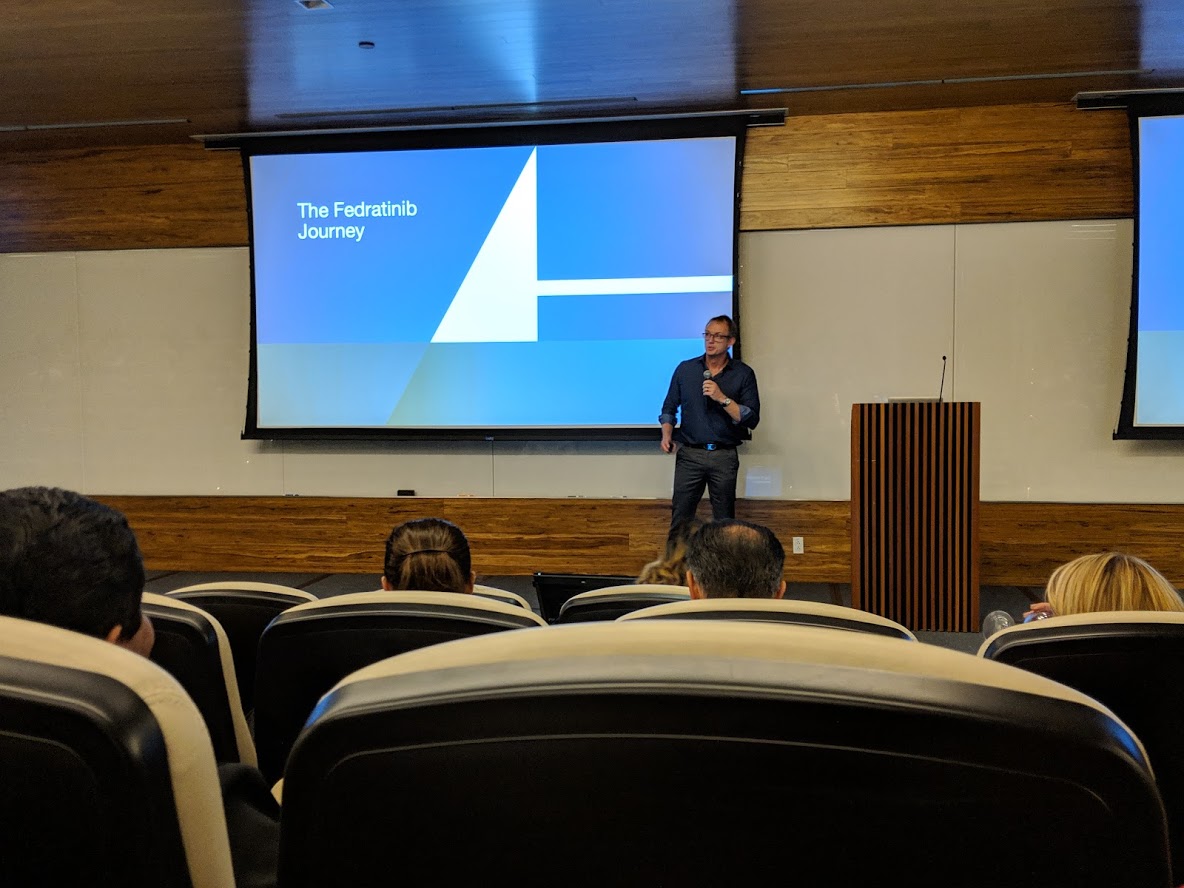 Lesson #2:  Be Aware of Patients and their Unmet Needs

Incyte’s drug, ruxolitinib (Jakafi®), went into the clinic the same time as fedratinib, but moved faster and got approved in 2011. It is not as selective, because it inhibits JAK1 as well as JAK2, which can suppress immune function. Patients on ruxolitinib long term risk skin cancers because T cell monitoring crashes. The ultimate problem is that it also causes thrombocythemia. Platelet counts can crash, so patients take less drug. Today Jakafi is a $2 billion drug, but 70% of the patients have a response rate of 0 to 8%. They need something else. “This is why it’s important to be aware of the patients and understand their unmet needs,” Hood said. “Don't just build a widget or a me too. Understand how you can help people feel better and live longer. The economics will follow.” The key feature of fedratinib is it's selective for JAK2. It doesn't hit JAK 1, JAK 3, or suppress the immune system.

Hood was involved not only in drug development, but he also helped design the Phase I trials. Fedratinib has been tested in nearly 900 patients in 18 studies. The primary response is change in spleen size. Some patients responded so they started another phase. Some were on the drug for over five years. Later, it would go on to demonstrate best-in-class efficacy in Phase III, after two doses, with a response rate of around 50%, compared to a mean response of 34% with ruxolitinib. “The trials also showed fedratinib is extraordinarily safe,” said Hood. “After six months of placebo, patients moved over to the drug. Infections got better, which was differentiated from the standard of care, i.e., Jakafi, which can increase risk of infection.”

In 2010, Sanofi announced it would acquire TargeGen for up to $635 million. Hood said they had made a verbal agreement back in 2008, but the economic crisis impacted the timing and the structure. The deal was backend loaded with Sanofi paying $75 million up front. The VCs got their initial money back, and upon meeting a series of regulatory milestones, they'd make a big return. TargeGen had completed a Phase I/II study and additional studies were scheduled for the second half of 2010.

In 2013, three years after the acquisition and Phase III clinical trials, Sanofi quickly halted development of the program. They found 7 of 877 patients had what appeared to be Wernicke's encephalopathy. This is a vitamin B deficiency commonly associated with alcoholism, which leads to brain swelling and confusion. It is typically found in 1 to 2% of the population but is not usually diagnosed. The patients had large spleens and livers pinching on the gastrointestinal tract, causing them to become malnourished and resulting in the diagnosis. Sanofi notified the FDA on a Monday, the hold was announced on Friday, and on the following Monday Sanofi terminated the program. At the time, Jakafi had only generated around $100 million in its first two years. If fedratinib could successfully meet its milestones, Sanofi would have to pay around $0.5 billion at launch.

Lesson #3:  Be Driven to Save Patient Lives

With the trial stopped, responding patients no longer had access to fedratinib and some did not respond to ruxolitinib. People were getting sick and dying. Their oncologists started calling around for help. Because they knew Hood from his involvement in Phase I, they tracked him down at Wintherix, a company he co-founded in 2008, which became Samumed in 2012. Hood says, “As an entrepreneur in the life sciences, if someone tells you, ‘The drug you invented saved my life. I need it back. Can you help me?’ If that doesn't call you to action, then you're in the wrong business and you just need to stop.” Dr. Hood didn’t. He talked to Sanofi about getting the drug back on compassionate use. But the batches had expired based on stability.

Lesson #4:  You Have to Be a Believer

The TargeGen investors were upset with Sanofi stopping the program and thought they were owed a giant milestone. Hood found a venture group in Belgium to strike a deal between Sanofi and the TargeGen investors. For his part, Hood had to put up $250,000 of his own money to get exclusivity for development and commercialization. But the deal was contingent on finding external financing within 120 days. “You have to be a believer,” Hood said. In October 2017, they closed $22.5 million in Series A financing from Medicxi Ventures and formed Impact Biomedicines to get the drug off hold and pursue manufacturing.

Hood says, “When you start running the trials, pay attention to the patients.” In building a compelling case to remove the hold, Hood found some patients enrolled had issues before coming on, and during, the trial. Three patients had heart attacks before the trial, one had a brain issue arise, and multiple patients had strokes. They were all allowed to continue the trial, and they all reported confusion.

They also had to address two published studies that showed that at around one micromolar fedratinib inhibited thymine (vitamin B1) transport in vitro. Since Hood co-developed the drug, he knew that it was not soluble at one micromolar in a protein-free environment. His lab immediately joined the author to show that how the addition of protein, to mimic the body, increases IC50 to over 300 micromolar. Hood says, “You can't just know the clinic, you also have to know your assays and analyze the data.” After meeting with the FDA several times, the data was sufficient to remove the hold and file an NDA.

Impact Biomedicines had 11 of the top 14 pharmaceutical companies in the world interested in the molecule because it was now a valuation and deal structure issue. They visited them all in the fall of 2017. “I don't think I slept at all, which is a good problem,” Hood said. In January 2018, Celgene acquired Impact Biomedicines in a deal worth $7 billion with $1.1 billion upfront and up to $1.25 billion based on hitting regulatory milestones. In January 2019, Celgene filed the NDA. It was granted priority review in February, and has a PDUFA date of September 2019. “This drug is going to be on the market in 2019,” Hood said. 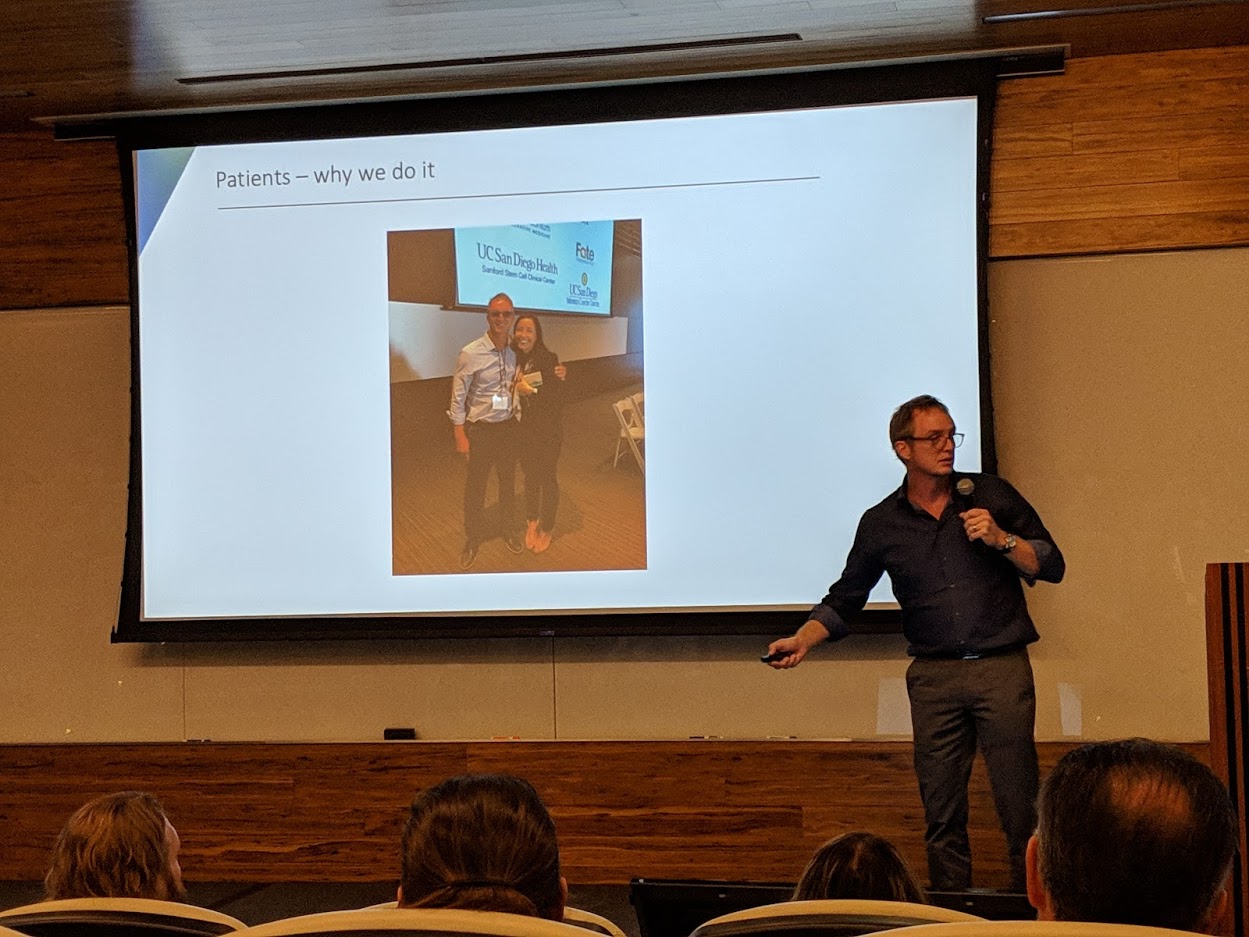 Hood closed sharing a story of a patient he met who was diagnosed with myelofibrosis in her early 20s. She went on the fedratinib clinical studies and responded very well. When the drug was taken away, she did not respond to ruxolitinib or other experimental agents. Her platelet counts were below 30 and crashing and her spleen was enlarged. She was at risk of bleeding out and getting hemoglobin transfusions every three weeks. Hood said, “We got her on expanded use three months ago. Because the drug is available now.”