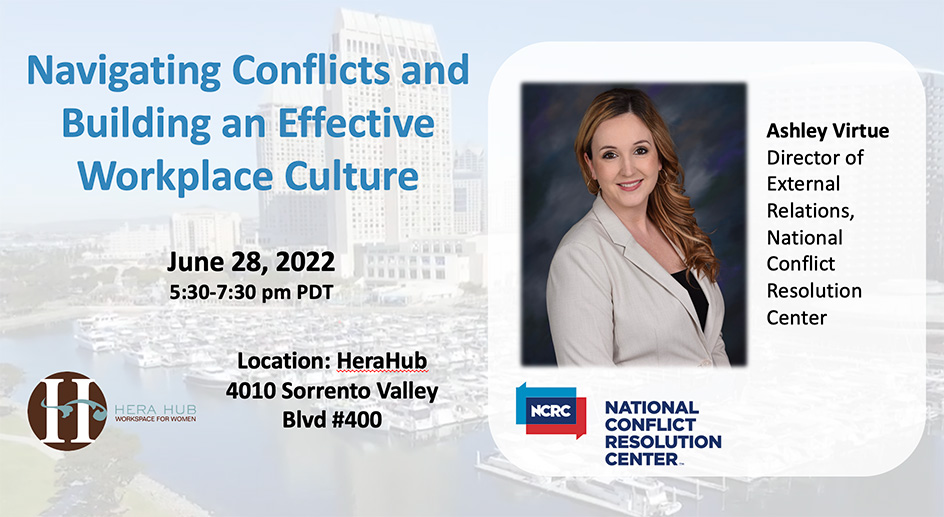 Building on their success in teaching people to communicate more effectively, the National Conflict Resolution Center (NCRC) will present an interactive workshop on workplace conflict resolution and communication strategies.

During this workshop, participants will look at how different communication styles can sometimes be the root of conflict and how to recognize when a communication breakdown is happening, in order to do something about it before it escalates.

This workshop will help participants learn how to communicate their needs in a way that helps build a relationship, rather than hurt it.  A deeper understanding of how others perceive and process conflict, allows participants to gain new insights into their working relationships.

Ashley has been with the National Conflict Resolution Center (NCRC) since 2005. She has been instrumental in the development and promotion of multiple mainstay programs at NCRC, and has focused much of her career expanding NCRC’s work nationally and internationally.

In recent years, Ashley has worked diligently to launch a major PR campaign, with the ultimate goal of positioning NCRC as a “thought-leader” nationally. Since then, NCRC has appeared on hundreds of local, regional and national media outlets and developed a robust social media campaign across multiple platforms. As often as you find Ashley working behind the camera on strategy, you will also find her in front of the camera most-days, representing NCRC in the news and on-line. As one of NCRC’s primary trainers, she has been featured in media outlets such as Forbes, The Washington Post, C-SPAN, NPR, PopSugar, and many others.

While greatly invested in NCRC’s growth around the world, Ashley also recognizes the importance of having deep roots in San Diego. Because of that she is extremely committed to NCRC’s involvement in multiple legal, corporate, community and education institutions throughout the County. Ashley has received a number of awards recognizing her commitment to the community, including being a finalist for San Diego Magazine’s Woman of the Year and being honored as a “KNX Hero” by Los Angeles’ KNX 1070 News Radio station.

Most importantly, Ashley is committed to the idea that we can make the world a better place through civil dialogue. This thought is perfectly summed up in a quote from Mother Teresa that Ashley often refers to, “I alone cannot change the world, but I can cast a stone across the waters to create many ripples.”

Thanks to our Platinum Sponsors: