The latest SDEE event was held on June 26 at the Hera Hub in Sorrento Valley.  A big thank you to Morrison and Foerster and the Hera Hub for providing the welcoming venue as well as delicious empanadas, snacks, desserts, beer, and wine for the reception.

The keynote speaker was Ashley Virtue from the National Conflict Resolution Center (NCRC). Ashley has been at the center for 17 years and - using workshops, courses, and 4-week long certificate program - provides guidance to individuals and corporations on how to disagree effectively in the workplace. 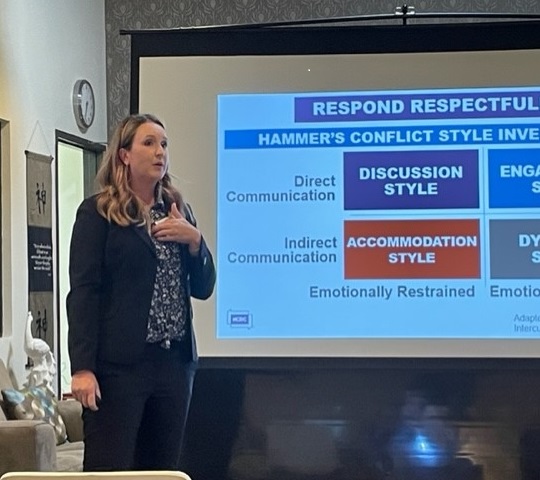 It is inevitable to have disagreements, but it imperative for a productive work environment to have conversations to resolve issues.

The workplace has evolved dramatically in the last 10 or 15 years. We recognize more and more that teams are most effective when there is diversity of race, origin, religion, sex, upbringing, etc. While a decade ago certain topics, like religion and politics, were taboo, now individuals are encouraged to bring their full selves to work. At the same time, corporations strive to build a safe environment for everybody.

Ashley explained the art and ART of navigating and resolving conflicts. The A stands for active awareness, which means recognizing differences and implicit bias. Biases do exist, however we need to be aware of them to avoid that they affect our actions. Having a bias is not necessarily a problem: the problem is acting on the bias. When we disagree with somebody, we need to ask ourselves if part of the disagreement simply stems from a bias we may have. A common bias is the so-called confirmation bias, when we tell ourselves that a certain behavior confirms what we were expecting. Simply being aware of biases, however, is not enough for conflict resolution. We need to respond respectfully and troubleshoot together (the R and T in ART).

Hammer’s conflict style inventory is specifically about how to respond respectfully. Dr. Hammer defined four main styles, which derive from our personality and upbringing, with different approaches to communication (direct vs. indirect) and emotions (restrained vs. expressive).

The discussion style is in the upper left quadrant. People with this style are direct communicators and discuss the issue immediately without displaying much emotion. People with engagement style are direct communicators as well, but they voice how they feel. The accommodation style is in the lower left quadrant: they do not communicate directly nor immediately, and do not display emotions, like if the conflict did not affect them. Finally, the dynamic style is characteristic of people who do not approach the issue right away but are emotional: they show that they are upset, but don’t say why.

Ways to troubleshoot together include: 1. State how the situation is affecting you without attacking the other person. In other words, do not focus on what they did, but on how you feel; 2. State clearly your interests and what you would like to see happen, not just your complaint; 3. Use “we” instead of “I” as this created unity, common ground, and builds a sense of teamwork; 4. State what you value in the workplace because it would be difficult for others to disagree with you on that.

Finally, Ashley suggested to practice situations out loud so to be ready when a conflict may arise, either with a coworker, a client, or an investor.