The Founders Tales event organized by the San Diego Entrepreneurs Exchange (SDEE) is always a great opportunity to hear the stories of local life sciences entrepreneurs, and this year was no exception. The event was at Green Acre on Campus Point on Thursday, October 10, 2019, and was sponsored by Alexandria, Marsh & McLennan, and Morrison & Foerster. The reception was a nice opportunity to network and chat with the exhibitors while having delicious pizza bites, wine, and beer. The event started with the president of SDEE, Randy Schreckhise, describing SDEE’s mission, membership options, and volunteering opportunities, after which representatives of Alexandria spoke about their new building, GradLabs, and the insurance broker Marsh & McLennan described their services. Seven entrepreneurs from Brandwood Medical, Leulan Bioscience, TraXel, ArgoNox Discoveries, Digital Proteomics, and Viva Biotech gave a 30 second pitch before the four founders took the stage. This year we heard from Todd Harris, CEO and co-founder of Tyra Biosciences; Jeff Stafford, CEO and co-founder of Jecure Therapeutics and co-founder of Quanticel; Kevin Lustig, CEO and co-founder of scientisit.com and other ventures; Claire Weston, CEO and founder of Reveal Biosciences.

Pick your cofounder carefully, because you will spend a lot of time with that person. Seek mentors and emulate people you respect. People can be very generous if you share your ideas. Raise the money to get started by asking family, friends, or former college professors. Take enough money to get started but don’t take too much, otherwise you will lose control of the company. Think also about how much money you can raise for the venture capitalist that invested in you, and about an exit strategy. Join groups like SDEE or other networking groups. 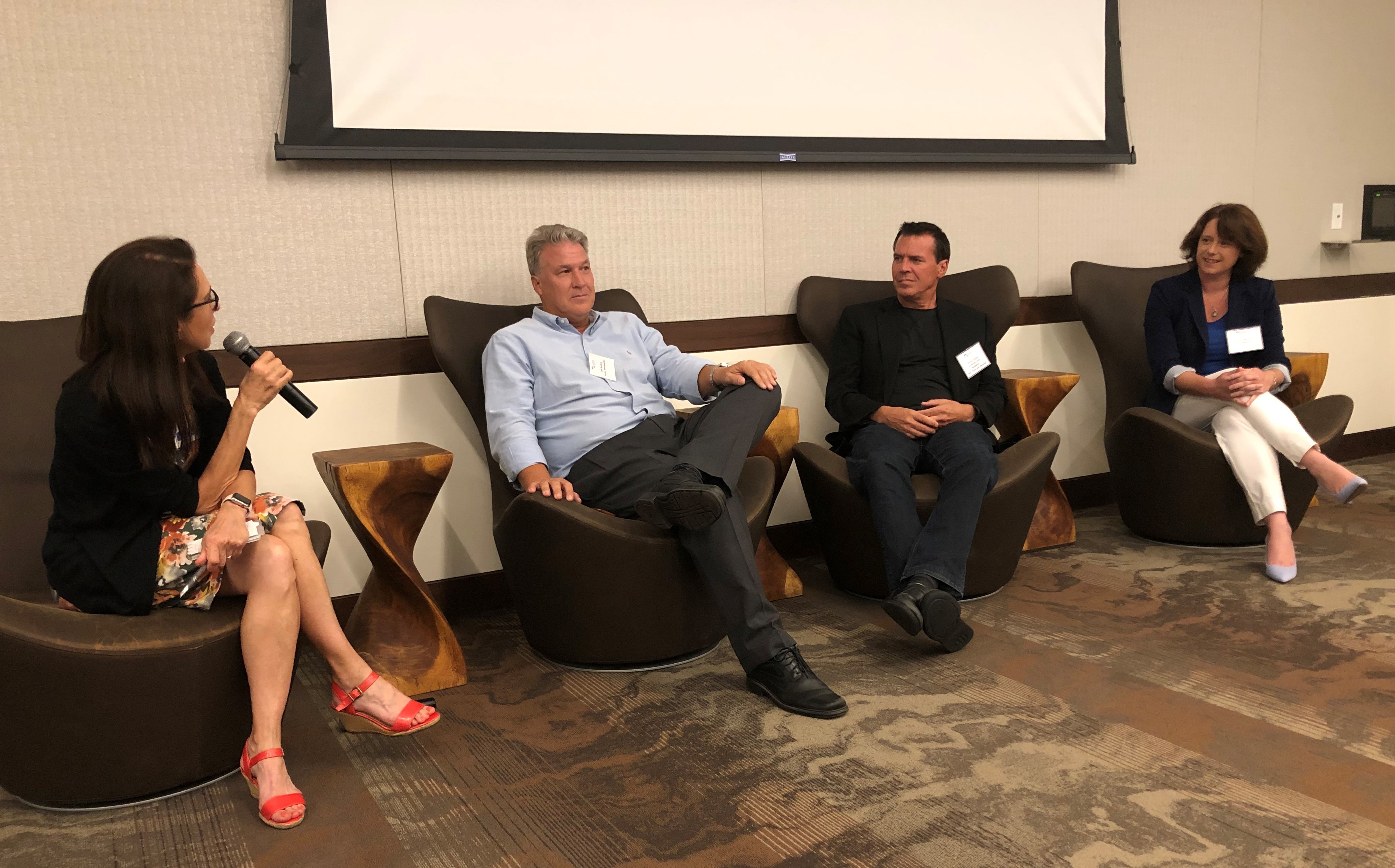 Todd Harris started Sienna Lab while working for McKinsey. His PhD from MIT in biophysics allowed him to find a way to use near infrared light for laser removal of light hair. He knew that, when starting a company, assets and intellectual property, financing, and a team are all necessary for success, but all may go up and down. Although another company was doing something similar, he eventually got intellectual property protection for both silver and gold particles; the down was filing for chapter 11 bankruptcy. He stepped down from running Sienna 4 years ago and started Tyra Biosciences in 2018 to find novel targets for platinum resistant cancers.

Jeff Stafford started a few companies by leveraging academic innovation and translating it into commercial products. He started Quanticel thanks to a collaboration with Steve Quake and Mike Clarke from Stanford. Versant Ventures funded the company and found a strong partner in Celgene, which bought the company in 2015. Jecure started after to a chance encounter with Ariel Feldstein, a renowned gastroenterologist and expert in non-alcoholic steatohepatitis at UCSD. The collaboration started in 2014 and, 2 years later, Jecure got financing from Versant Ventures and moved into J Labs. They generated a promising molecule in 2017, moved from J Labs into a lab at Nexus Center, were nominated one of the top 20 companies to watch by Biospace in January 2018, and got acquired in November 2018 by Genentech, which has moved the Jecure’s compound forward in their pipeline. Jeff started a third company, 8five8, just this year. He feels that a well-positioned company could reach the clinic or generate an exit in 3 to 5 years by working on 3 to 5 well validated targets with 40 to 45 employees and 50 to 60 million dollars.

Outsource Everything but the Genius

Kevin Lustig started his impressive career at Tularik, which was bought by Amgen. Kevin then joined Peter Schultz at Calypsis and ran the R&D. The company raised $170 million in venture capital money but eventually failed because it did not address the research bottlenecks. Kevin believes that a better way to do research is to outsource everything but the genius. Outsourcing allows faster and cheaper access to new tools and technologies with immediate translation of ideas into results. With this in mind, Kevin started scientist.com, which is a marketplace to outsource R&D services. Scientist.com has done already the due diligence and has set up agreements with thousands of vendors, so that an entrepreneur does not need to. Although not everything has gone smoothly, scientist.com raised money from Hollywood stars and has now 80 pharma partners. Kevin’s take home messages are: pick a mission your are passionate about; focus on hiring talented, hard-working people who believe in the mission; nurture the company culture; raise as little money as possible; never give up and pivot when needed; devote half of your mind to improve the existing processes and the other half to figure out how to tear everything apart and make it radically better.

From CRO to Tech Company

Claire Weston started Reveal Biosciences with the goal to improve pathology readouts in preclinical and clinical research. Digital imaging in pathology is extremely attractive for various reasons. First of all, there is a shortage of pathologists in the US and the rest of the word. Secondly, pathology is subjective and different pathologists may score the same slide in completely different way, potentially affecting how a patient is treated. Making pathology more objective required building ImageDx, an artificial intelligence platform with computer assisted diagnostic capabilities. Along the way, Reveal went from 2 employees to 35 and from a small facility on Sorrento Valley Road, to one on Cornestone Court, to the current one on Top Gun Street.  It also went from CRO to technology company; positioning the company this way got the interest of venture capitalists and a significantly higher valuation.