When the State Department Paid a Visit to SDEE

With immigration and other foreign policy matters still up in the air, the United States Department of State continues to pursue enduring matters such as technology, innovation, and world economic growth. Through its Foreign Press Centers, the State Department provides foreign-based journalists with services to help them report on American society, politics, and culture. They recently hosted 25 foreign journalists on their American Innovation and Entrepreneurship Reporting Tour that included a visit with San Diego Entrepreneurship Exchange (SDEE) on May 2, 2017.

In searching for sites to visit around innovation, tour organizers found SDEE and requested a visit. Taylor Moyer, President of SDEE and CEO of ManagedLab Services, quickly jumped on the opportunity and began working with the SDEE Executive Committee to host the group of foreign journalists and highlight the diversity of our entrepreneurial ecosystem.

The group was comprised of journalists from Brazil, Bulgaria, Colombia, Georgia, Germany, Indonesia, Malaysia, Nigeria, Pakistan, Russia, Serbia, Slovenia, Sri Lanka, Tunisia, UAE, Ukraine, and Vietnam. They applied in response to an announcement distributed through their US embassy. Each has extensive media experience with positions ranging from reporter, columnist, journalist, correspondent, and editor covering business, technology, or innovation in their respective countries. Many were interested in how entrepreneur clusters form, how ventures get fundingꟷspecifically from the government, and where ideas for new businesses come from. 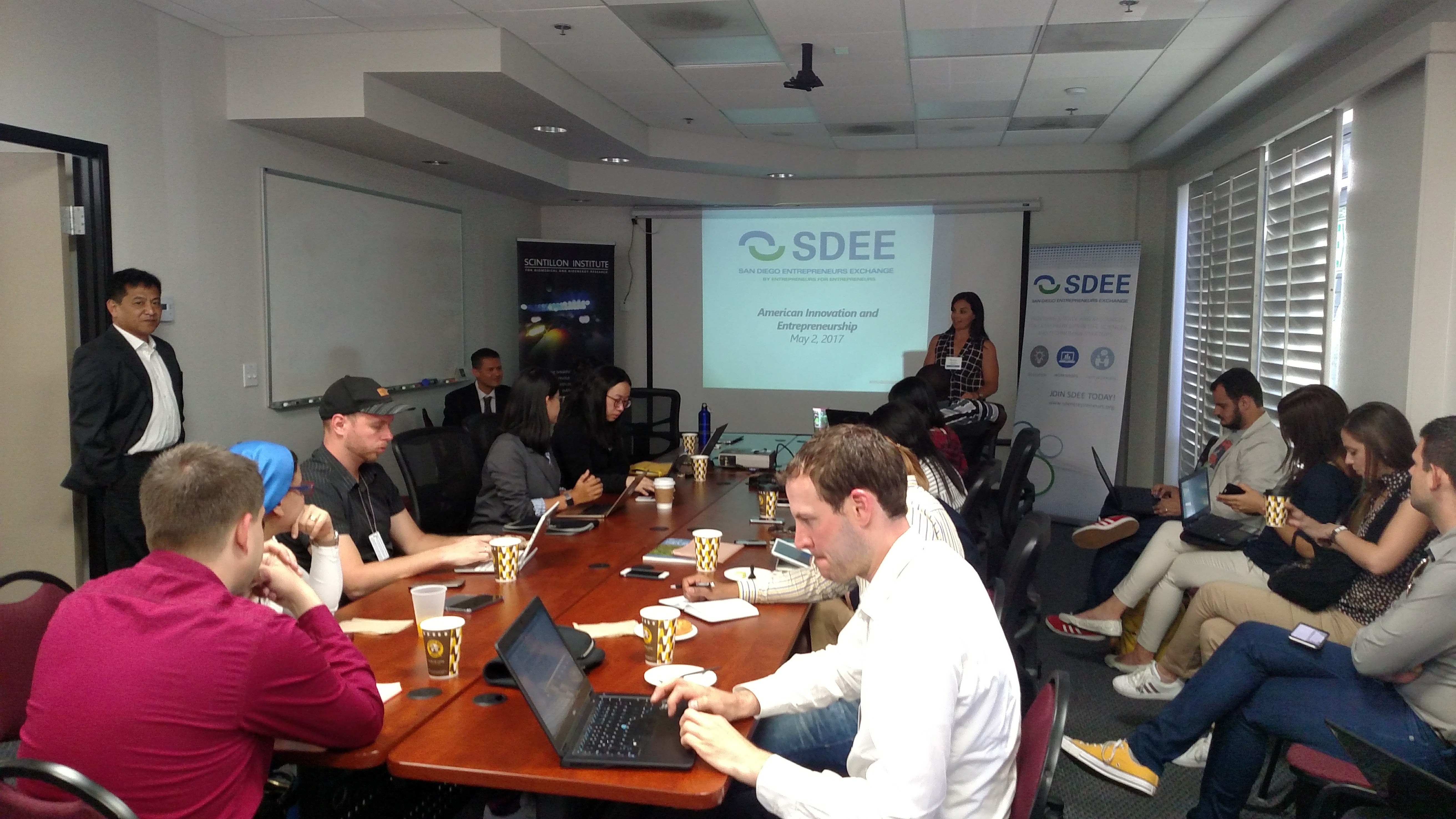 Their 10-day tour began in Raleigh, NC, with a stop in Austin, TX, and ended in San Diego, CA. Their tour with SDEE kicked off at the Scintillon Institute where Taylor opened providing an introduction to SDEE and how the organization supports entrepreneurs. She was followed by local SDEE member success stories presented by Richard Lin, Founder and CEO of ExploraBio Labs, Francisco Lio, Business Development from Neuropore Therapies, and her own story of how she started ManagedLab Services.

Richard Lin cited specific characteristics of entrepreneurs such as not being afraid of failure and not saying no to new ideas. But most importantly he said you cannot innovate if have too much inhibition. He referenced the SDEE monthly happy hours as a great space for brainstorming, especially with other like-minded people.

Francisco Lio told the story of how Neuropore was started by two people secretly working at a borrowed bench. He emphasized the value of networking among SDEE members to identify outsourcing services such as animal facilities that small companies can’t afford to build on their own.

Taylor related how she started as an independent contractor with a mantra to always say yes, which has taken her to 50 employees in nine years. She highlighted the mentorship and advice she’s gleaned from other SDEE members in learning the ropes of starting a business. With so much at stake, she highly values the advice from other founders who share her experiences. 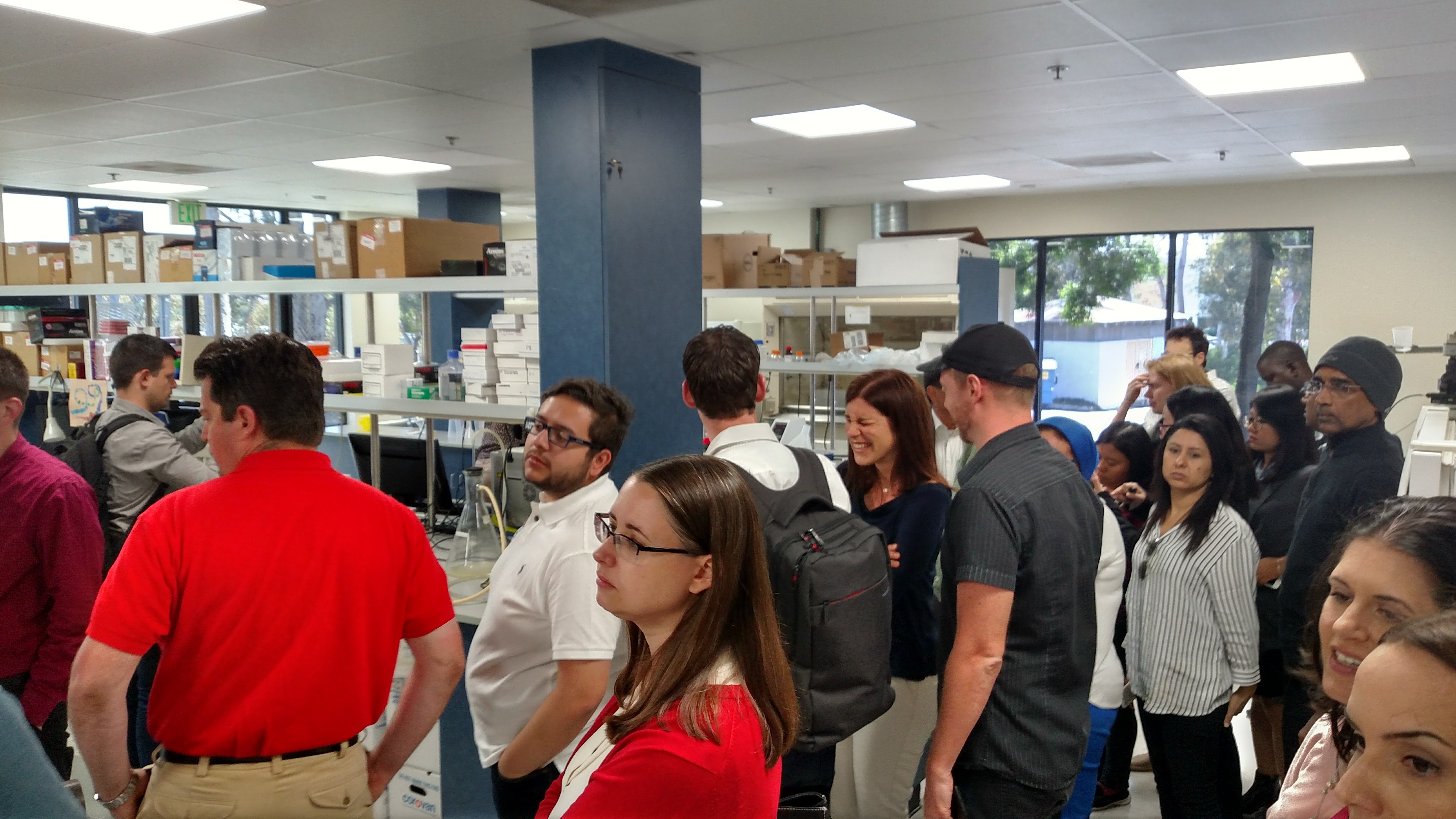 Before the tour of the Scintillon Institute, Jiwu Wang, President and CEO of Allele Biotech and founder of the Scintillon Institute, described the institute’s mission, projects, and funding. On the tour, Jiwu walked the journalists through molecular biology labs, viewing cell culture rooms and scientists at work, highlighting the diversity of nationalities represented. 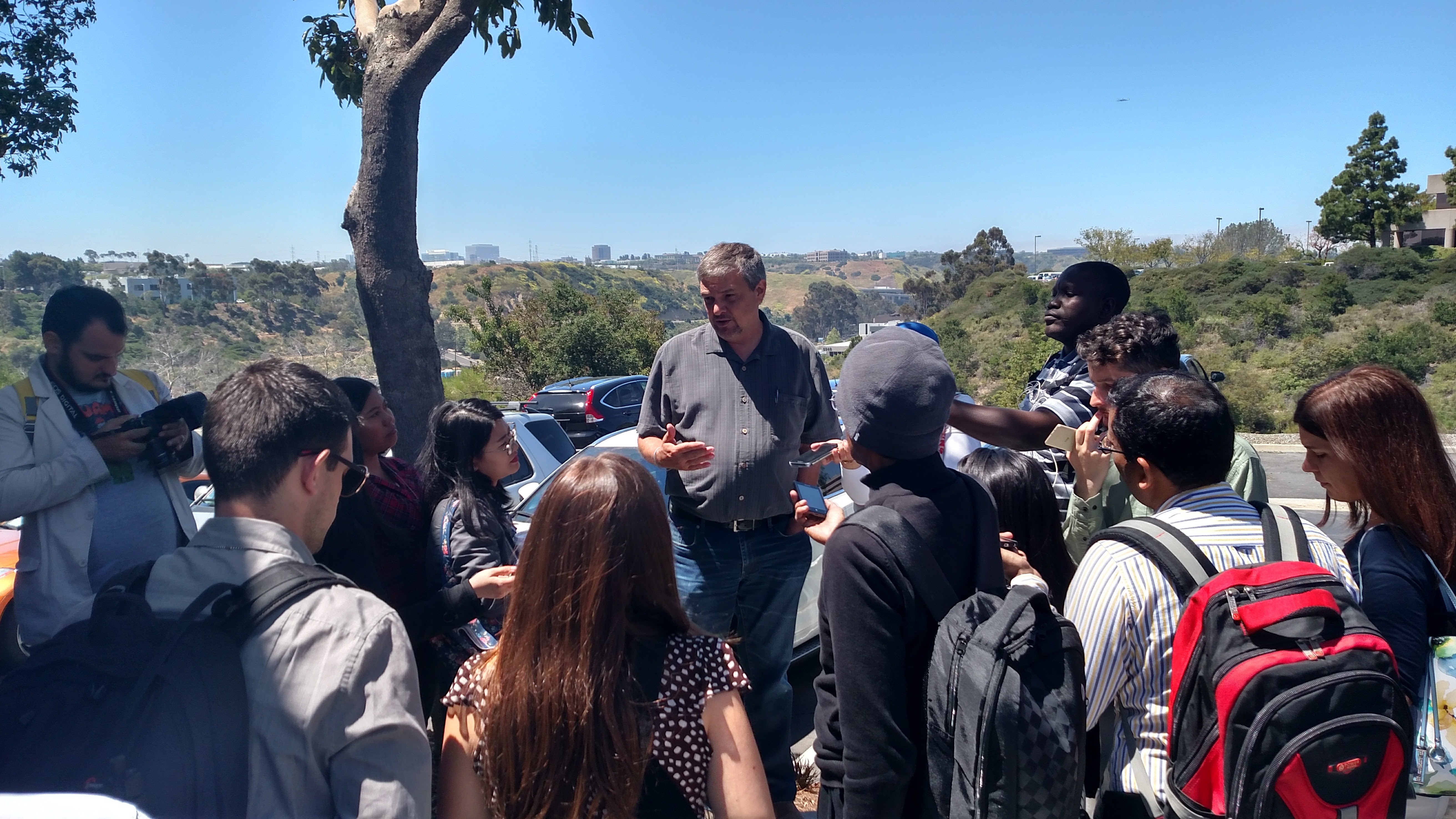 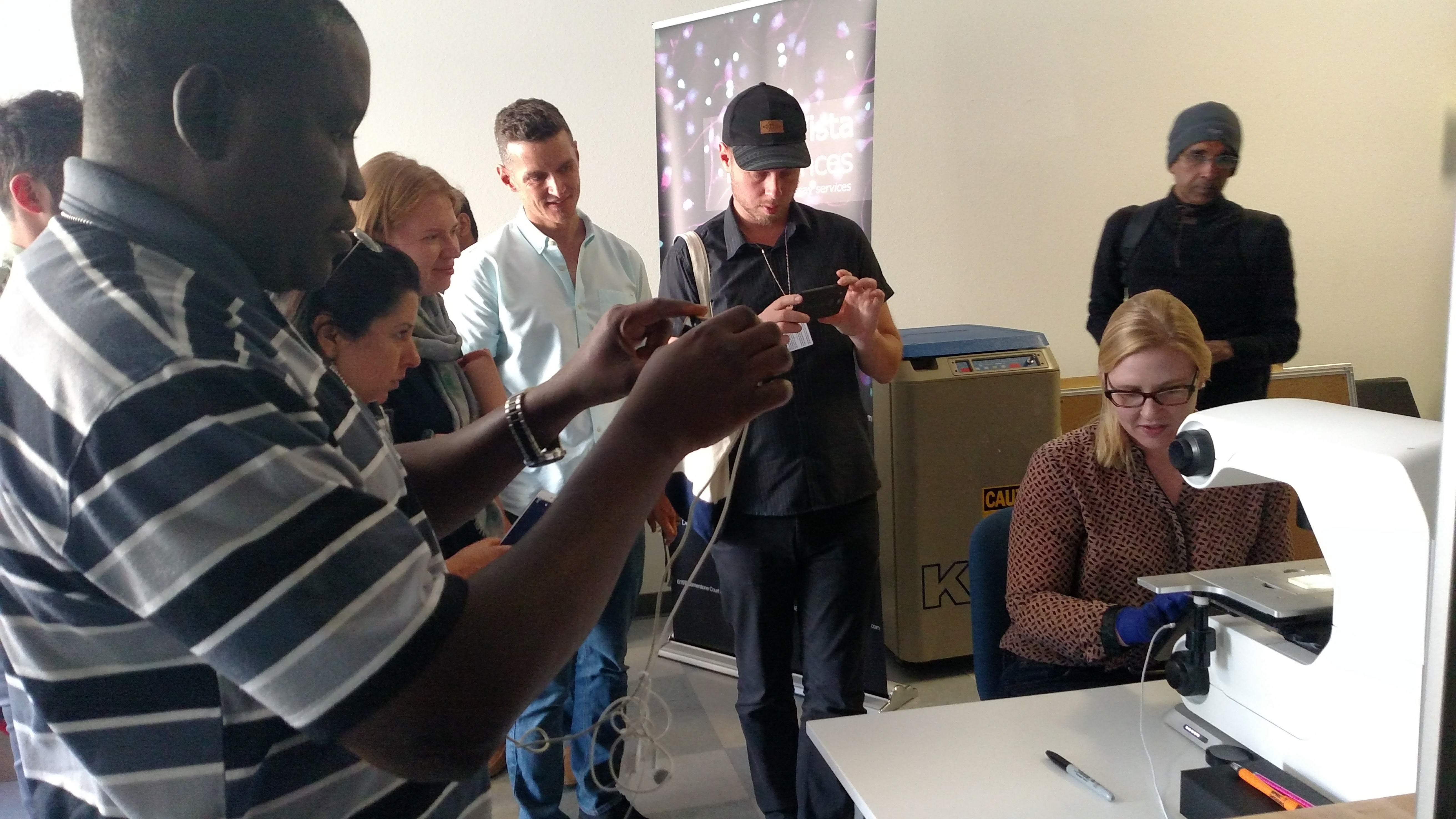 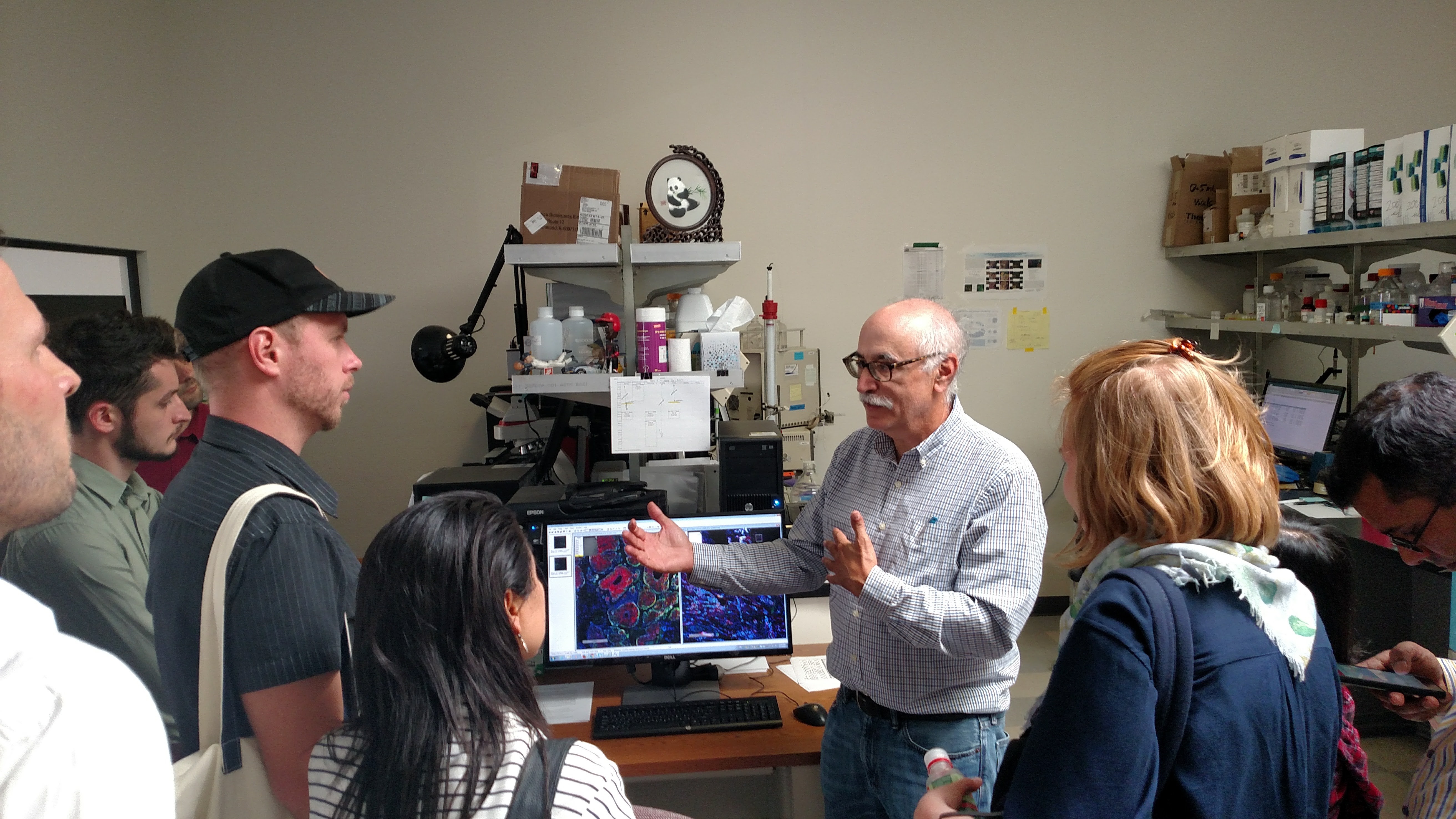 The recurring theme was the story of entrepreneurship that reverberates around our community. The ingredients that spark innovation in San Diego cluster around our world-class academic and scientific research institutes, geography that supports effortless collaboration, and a culture that invites informal discussions. Also, venues, organizations, and events that bring scientists together to share ideas, equipment, and lab space. And the enabling concept that a scientist can test an idea in secret on a borrowed bench with self-funding and eventually secure government funding through small business innovation research (SBIR) and small business administration (SBA) grants. It’s organizations like SDEE that bring entrepreneurs together to share stories, advice, and equipment that create a community that supports entrepreneurial camaraderie and success. 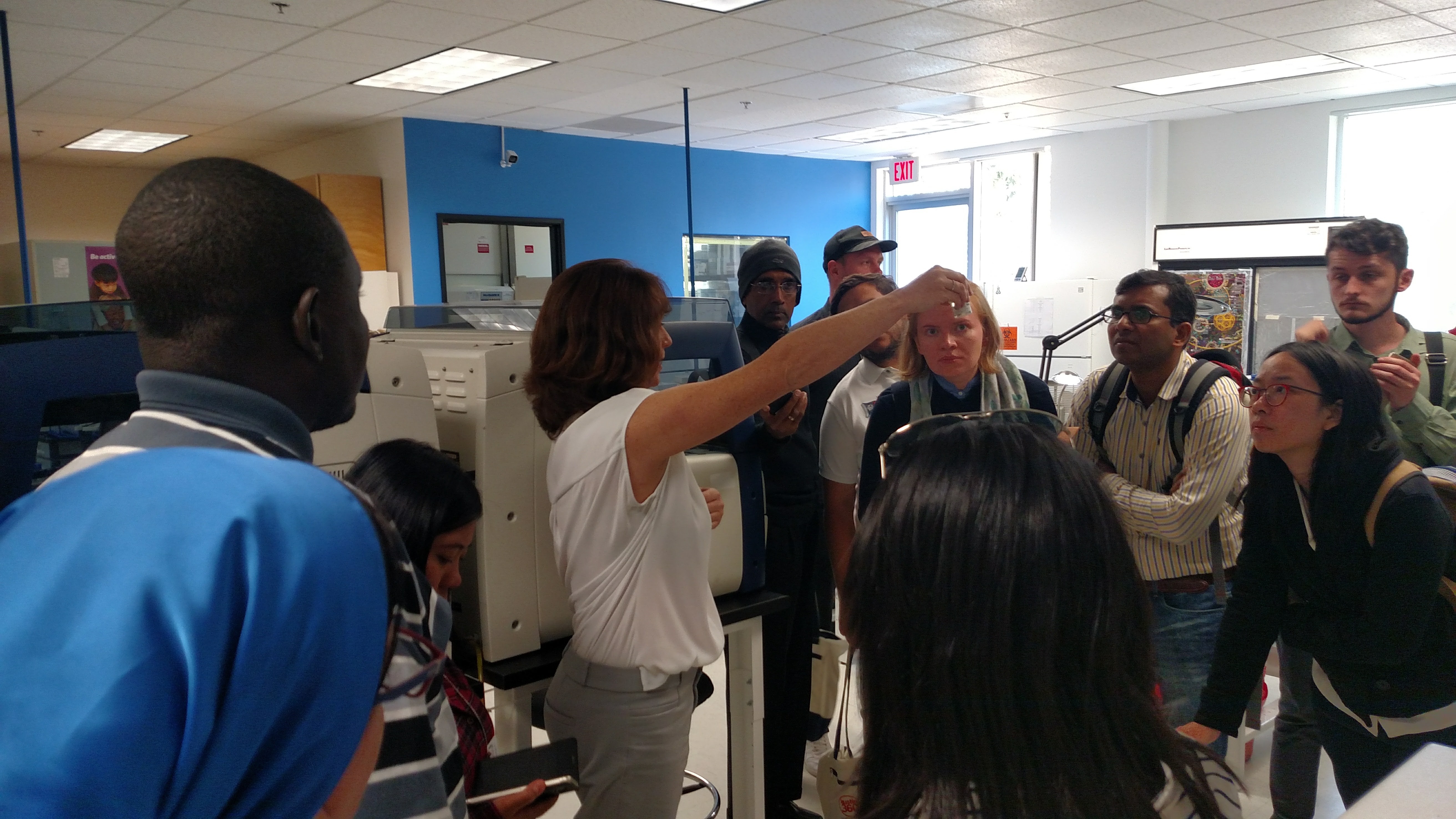 The foreign journalists will be writing news stories about their tour. As soon as they are written, translated, and distributed, we’ll be sharing them with you. More to come…