On March 6, 2018, Dr. Donald Kirsch spoke about drug discovery and presented his book, The drug hunters: the improbable quest to discover new medicines, at an event organized by SDEE and LaunchBio. The event took place at BioLabs in Campus Point and was sponsored by the law firm Procopio, the City of San Diego, and BioLabs. 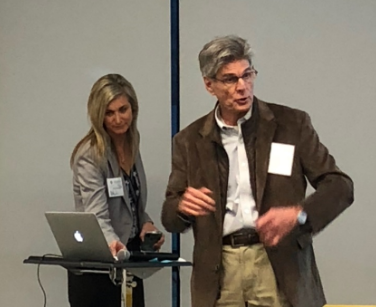 Donald started his talk by saying that the pharmaceutical industry is one of the most hated ones, according to a Gallup poll, together with big banks and big oil. Why is an industry that strives to cure diseases, improve people wellbeing, and prolong life, one of the most hated in the United States? People have 3 main complaints about pharma (note the “you people”): 1. Why do you people charge so much for your drugs? 2. Why do you people make drugs that make healthy people sick? (they may refer to the very rare adverse event of rhabdomyolysis in people on statins); 3. My uncle Joe went to the doctor and he was told that there was nothing to do. Why don’t you people come up with a drug to help uncle Joe?

Drug discovery is a very expensive and lengthy process. The average time to develop a drug is 14 years and the cost of one FDA-approved drug is a billion dollars. That cost is so high because it covers the 99% of projects that don’t succeed. In addition, 75% of the compounds that get FDA approval and hit the market don’t even return the cost of the investment.

Making a drug is somewhat similar to making a movie: it is expensive and one never knows how it turns out until it is out on the market. You need skills, patience, money, and a good dose of luck (the 4 Gs in German).

Another challenge of the pharma industry is the uncertainty of whether what we do is even doable. An engineer knows that his project requires funding, the product may face competition and needs to be sold at an appropriate price, but he knows that the project is doable and the product can be made. This is different from a scientist in drug discovery, as he does not even know if the final product can be made.

Donald channeled his frustrations of being a scientist in drug discovery into writing The drug hunters, a collection of more than 200 drug discovery stories.

There were drugs before there was science. Morphine, quinine, digitalis, and colchicine are good examples of drugs discovered centuries ago and still in use today. The discovery of these drugs was mainly serendipitous: harvest plants, make extracts, and see what happens. Eventually, chemical companies started to experiment with modification of compounds, and some compounds became drugs.

Donald also told us the very interesting story of how diethyl ether, called also simply ether, became the general anesthetic that we all know. The story of William Morton and ether is fascinating and includes love, surgeons, shady newspapers, and professional jealousy. But not money, as Morton did not make any money from the discovery of the general anesthetic that revolutionized the art of surgery in the mid XIX century.

Another fascinating story from The drug hunters is the discovery of aspirin and the rise and fall of selective cyclooxygenase 2 (COX2) inhibitors. Aspirin was discovered when the German chemist Gerhardt acetylated salicylic acid. He also acetylated morphine and made heroin, but that is another story… In any case, aspirin was found to be effective in reliving joint pain from rheumatoid arthritis, headaches, and various ailments in the late XIX century - without anybody knowing its mechanism of action - until Sir John Vane found in the 1970s that aspirin inhibits COX. From there, COX1 and COX2 were discovered and then the COX2 selective inhibitors Vioxx (rofecoxib), Celebrex (celecoxib), and Bextra (valdecoxib). But the selectivity of the coxibs and their marginal inhibition of platelet COX1 is responsible for the increased incidence of cardiovascular events that led to the withdrawal of Vioxx and the black box warning of Celebrex.

Although we make drug discovery mistakes even in the XXI century, the stories remain fascinating and the path worth taking.